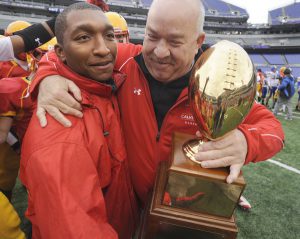 Coach Davis: After graduating from Calvert Hall in 1996, he went on to play at Johns Hopkins where he majored in Sociology. In the 2001 season, he coached the JV team at Cardinal Gibbons but then was promoted to Head Varsity Coach in 2003. while there, he compiled a 30-14 record, was voted Baltimore Ravens Coach of the year in 2003 and the 2006 coach of the year by the Baltimore Touchdown Club. He is married to Godlee and they have sons Jovon & Rashard and daughters Jordan & Stephanie.